The Florist Who Lied

It was my daughter's birthday on the 12th of July and I thought t would be nice to send her flowers...especially since she was working that day and I wouldn't get a chance to see her.  The night before the Pres' resting heart rate went from the high 70's,low 80's to 121 so we all cancelled our plans.  Anyway, back to the flowers.

Contacting a florist in Newport which was highly rated, I confidently placed an order for flowers to include Cala Lillies...her favorite. When I called, I specifically asked the young woman on the phone if they would be delivered that day...the day before her birthday. Putting me on hold while she checked, she came back saying "No problem. They will be delivered today before 5pm." 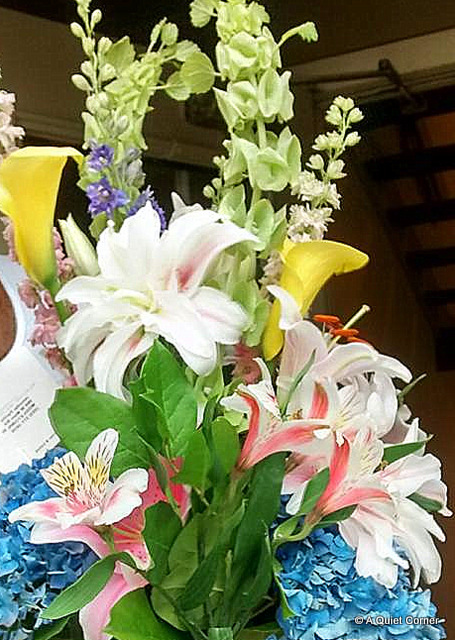 Not only did some call her to tell her she was getting flowers ruining the surprise entirely,
the flowers were not delivered until two days later...Monday night at 5:30 pm.

I am not here to "trash" the florist, however, I will never order from them again! My complaint to them was pointless because when they checked with the girl who took the order, she claimed, she never promised delivery.

Apparently HONESTY and CUSTOMER SERVICE are not in their vocabulary, although they took my $95.00!

Oh they are beautiful, but that was not right

I stopped doing flower presents many years ago when my mom said the ones she received were old and wilted. Linda@Wetcreek Blog

That is why certain company will have the telephone conversation between their customer and their staffs recorded . It's such a disappointment to have the girl say yes they can deliver the flowers by 5pm and yet they only managed to deliver TWO days later. Why 2 days later and not the very next morning. Since they have your daughter's number they could always call her again(they already spoilt the surprise) and deliver it to her home instead of office if she is not working.

The flowers are beautiful. Delivering 2 days after promised is pretty bad. Customer service is not what it used to be and it gets so frustrating. No one ever admits to making mistakes anymore either. What is so hard about saying. I'm sorry, I made a mistake and I'll make every effort to not do it again.

Beautiful flowers! I am sorry they did not arrive on time, shame on them for lying!

I hope the Pres is Ok now, is he behaving himself.

Have a happy Monday and a great new week ahead!

Oh, I'd be P O'd big time. You wanted to surprise her for her birthday, not some random later day!!!

We don't do flowers in our house anymore... sadly several bad experiences just made us not trust ordering them any longer.

What a disappointment for both you and your daughter, JP. Fortunately, my recent experience was positive when I ordered flowers for a friend in VA. I used a local florist (one I had not used before) and not knky did the flowers arrive on time, but my friend said they were beautiful. Like you did, I also called the florist but to thank them and I would definitely use them again.

What a disappointment for both you and your daughter, JP. Fortunately, my recent experience was positive when I ordered flowers for a friend in VA. I used a local florist (one I had not used before) and not knky did the flowers arrive on time, but my friend said they were beautiful. Like you did, I also called the florist but to thank them and I would definitely use them again.

Ouch! that is so disappointing JP. And expensive!! What a shame. I think I'd be contacting their head office about this as they would probably appreciate knowing the service you received was less than stellar.

Timing is overrated and perhaps someone at the florist was having a bad day. I'm grateful they were in fact, delivered and commend your thoughtfulness for your daughter's birthday.

Stunning flowers....but that is a disastrous delivery service.