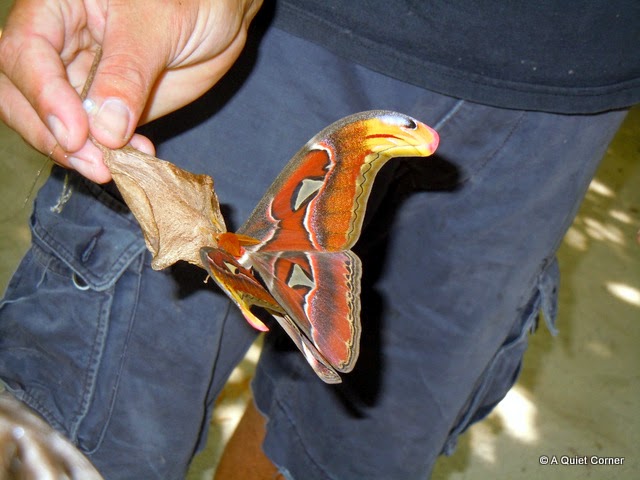 Although these were taken a few years ago, they make me smile so take a peek.

Taken in Aruba at The Butterfly Farm they give you a glimpse of my favorite critter that flies at night.

Found in the tropical and subtropical forests of Southeast Asia, the Atlas Moth surpasses other butterflies and moths in it's beauty in my opinion. 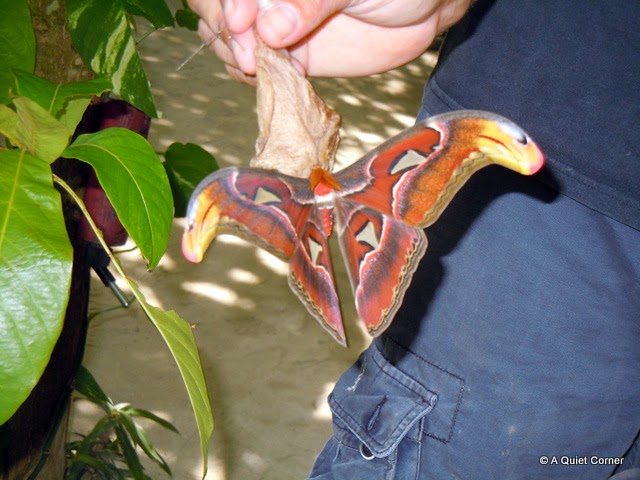 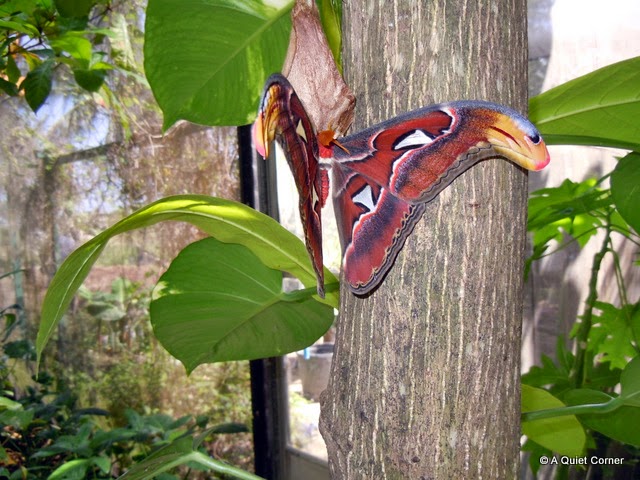 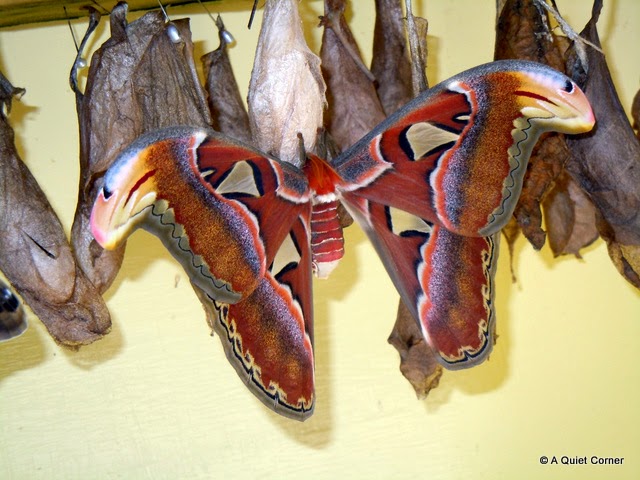 Here, just to give you a peek into their existence, I found this for you.

5 Awesome Facts About the Atlas Moth

Will McGough
filed under: insects, Lists

IMAGE CREDIT:
THINKSTOCK
We know what you’re thinking: You’d like to torch every one of those pesky bugs buzzing around your porch light and banging into your windows.
But forget those white-winged summertime pests that come to mind. An Atlas Moth would eat them for breakfast … if it had a mouth. A native of Southeast Asia, the Atlas Moth rivals any butterfly with its beauty and grandeur, and it’s time to show this insect the respect it deserves. Why? Here are five facts about its life that we find impressive.

1. IT’S THE LARGEST MOTH IN THE WORLD IN TERMS OF WING SURFACE AREA.

Ready for this? The wingspan of a female Atlas Moth can reach up to 12 inches with a surface area of 62 square inches. Go ahead and hold up a ruler … that’s one big bug.

2. THE WORD “ATLAS” IN ITS NAME HAS MANY MEANINGS, REFERRING TO ITS “MAPPED” PATTERNS, “TITANIC” SIZE, AND THE SNAKE-TIPPED EDGES OF ITS WINGS.

Many see the word “Atlas” as a reference to the bold and distinct lines that form the map-like pattern found on its wings, the different colors representing different geological formations.
A second theory is based on Greek mythology. The moth is said to be named after “Atlas,” the Titan condemned by Zeus to hold the sky upon his shoulders. The reference is more about the large size of the moth than the idea that they are bearing some sort of burden.
Lastly, in China, the Cantonese name for the moth translates into “snake’s head moth,” referring to the outer tips of the wings that look very similar to the head of a snake. You can see this very clearly in just about every photo of an Atlas Moth.
While all three theories have some ground to stand on, we think the Chinese are most on-point in their observation. Those tips sure do look like snakes!

3. IN TAIWAN, THE COCOONS OF ATLAS MOTHS ARE USED AS PURSES.

Seriously! The cocoons are very durable and spun from broken strands of brown silk known as fagara, which local communities non-commercially collect and turn into useable products, including purses. Some vacated cocoons don’t need to be deconstructed—they can be used “as found” as small pocket-change purses by simply installing a zipper!

You don’t have to worry about the Atlas Moth munching on the clothes in your closet. Despite their large size, they have no mouths and don’t eat once emerging from their cocoons, relying on fat storage from their immature stages of life.

5. ONCE THEY EMERGE FROM THEIR COCOONS, ATLAS MOTHS HAVE A VERY SHORT LIFESPAN.

After spending about a month in their cocoons, Atlas Moths emerge as the beautiful creatures we’ve been describing above. Unfortunately, this state is short lived as the adult moths typically die within a week or two of spreading their wings.
May 29, 2013 - 4:00pm

Sharing my critter with you and those at

Can you see WHY I am enamored by them?
Posted by Unknown at 6:03 AM