Slip Slidin' Away...aka Save the Children!

Yesterday was a busy, busy day here.  Yard work was a priority while the laundry was getting agitated!  As I went around to sweep the front porch and looked up, I saw something that really bothered me.  Going into the house to recruit the Pres' help, I grabbed the step stool and he headed first to the shed to get a piece of lumber, then to his work bench to get the drill and a few screws.  The nest was falling down!  It was literally slipping off the board.  The mud was so dry that the whole front end was sagging!  Can you see them all huddled together at one end? 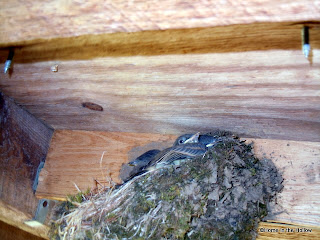 Handing him the drill as he stood on the stool bracing the piece of wood across the beams directly under the sagging and I mean sagging nest, I said, "Joe,  save the children..try not to scare them."

Mumbling under his breath, he raised the drill into position as I, hearing the incessant chirping I'd come to know so well, looked out toward the fence.  Mama had called in reinforcements! 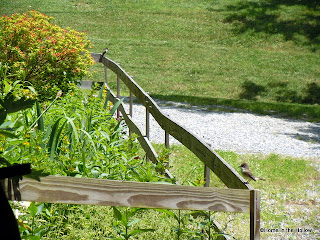 But just as the Pres pulled the trigger on the drill and as the whir of the spinning bit filled the air, Mother Nature took charge.  I watched the first young one spread it's wings and flap frantically.  Landing first on the back of the rocking chair, then off into the garden near Mom and Dad.  The second followed immediately, then the third and finally the last smashed one took flight.  We have liftoff Houston!

There's a lesson here:
Sometimes children bring a family together.
Posted by Unknown at 5:23 AM