Over and Out Houston

Sitting in the old white wicker chair that afternoon was routine for me.  Moon immediately headed toward something that was on top of the small table where I normally put my feet on.  We had had rain on and off all morning and there was a chill in the air.  Beads of water dripped slowly from the leaves above and realizing how soaked everything was, I placed an old towel on the seat of the chair. 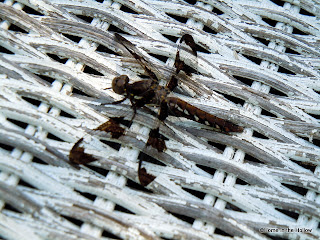 Once I sat down though I saw this dragonfly.  Isn't he AWESOME?  His wings were so unique, patterned like "camo" with darker spots and a thin film of mesh that was almost completely transparent.

Watching him for several minutes, he didn't even budge.  Then, I swear to goodness, I heard his wings flutter and beat like a little twin engine plane. 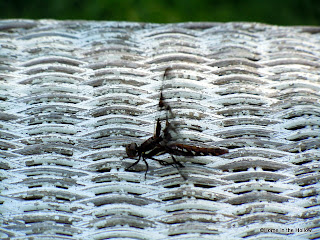 Watching him "rev" his engine several times, I wondered what he was doing.  Repeatedly, he beat those wings so hard and so fast, then simply lay them down again.

After about six or eight tries and clearance from Houston controls, we had lift off!  He was gone.

I wonder if he'd just gotten soaked and was drying his wings in order to gain momentum for takeoff and altitude!!  Bon voyage, mon ami!