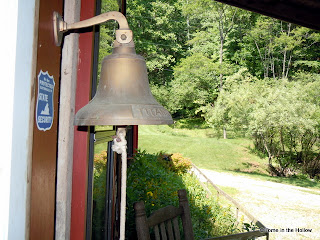 I've always believed that things happen for a reason in our lives and today was no exception.  While cleaning strawberries for an afternoon snack today, I heard the "doorbell" ring.   Opening the front door, an elderly gentleman, clean shaven and neatly dressed was standing there.  I noticed what appeared to be a small framed woman sitting in the front seat of the pick-up truck parked in the driveway.

"Is your husband?" he asked.

The Pres, sitting in his recliner in the oval office (aka the Family Room), got up and headed to the front porch..  A few moments later, the Pres came in and said, "Why don't you come out and chat with us?"  So, not knowing what to expect because he never told me who they were, I headed outside.

Well....remember I said things happen for a reason?  This eighty year old man lived here in the Hollow!  His house was set back deeper into the woods where the creek originates.  His "grand daddy" was born in this house in 1888 and this man's Uncle lived here while his brother and his family lived down in back.

He and the "Mrs" clarified and explained so much to us!  He was able to decipher the names written on my living room wall, telling me how they were related.  Then he went on to explain that the kitchen/dining area was put on in the 1940's.  The present mudroom was their old back porch.  The 1998 addition was his "grand daddy's" garden and he used to grow turnips "this big" holding his weathered hands together forming what was the size of a grapefruit!  "In front of the house close to the creek, there was a wooden swing where the girls were courted" as the fragrance of the climbing roses filled the air.

Telling him that climbing roses return each year, his eyes lit up then became glassy.  He apologized for being sentimental and changed the subject quickly, explaining that there were not trees on these slopes.  "Imagine it all cleared with grass and cattle grazing.  The corn field grew on that hillside," pointing to a densely treed slope.   "That was the cold cellar.  And we used to do all the canning in the canning house right where your well is."
Imagine after living here eight years, today I meet and chat with the one who could have explained it all. To me it was just another sign that our time in the Hollow will be coming to a close.

However, I told them that until it sells, they are welcome here anytime because our home was theirs and it's only fitting that it continue to be shared.
~~~~~~
I'm linking up to Two Bears Farm
for Lisa's Memory Lane Fridays today...stop by!
Posted by Unknown at 5:20 AM

How wonderful to have this encounter, especially in view of your plans. Love this! :)

What a neat story. We have also had old family stop by our place to share their stories of growing up here. Must be something about where we live. :-) Thanks for linking up!

Now, you will be able to give that history to the new owners.

How wonderful that he could come back to his old family home and share those memories with you.

I'm a little bit choked up,I really enjoyed reading this,I have visions that have brought tears to my eyes,what a sweet little couple to take the time(every minute is a blessing)out of thier lives(senior years)and stop in and share this wonderful history of your home in the Hollow....did not know you were trying to sale?..pray tell were are yall moving?
~JO
LazyonLoblolly

Very very special. This history should travel with the sale of the house. These wonderful folks will someday be gone and with them the history unless you can pass it on. And what a loss that would be.

Hopefully whoever buys it will also appreciate the history.

oh, you do need to write all this down - even with diagrams of the layout of the land he described as to how it is now..

What a wonderful story. I'm so glad they stopped by and shared all that history with you.

Now that was a nice thing to have happen. Such history your home has! I agree you should write it all down and leave it with the home for the new owner!

Oh that's fascinating!
Definitely keep record of his accounts..and yes, it would be so great to pass this info on.

I hope you will write this info down and pass on to the new owners of your home, this is like If Walls Could talk on TV. what a story.

Now you learned more of the History of the Hallow...

I would type up that beautiful history of the house and leave a stack of them for people interested in the house to take when they do a walk through.

I would also do one and frame it and leave it in the house.

So nice that they were able to come back and revisit their younger days. I did not realize you were selling. It makes me sad. I hope it is for the better that you leave the hollow.

OH! how cool is that!
better late than never...to have learned of your Hollow's history...

I think it's wonderful when a home has such a history--it allows whoever lives there, to have a connection and know what's made the house a real home...

That's so cool to know the history of your place! I would love to know more about mine than we do but I doubt I ever will. When I did the title search on our property it appears that no one really lived here for much over 3 years or so at a time. Oh some where here a little longer but used it as a camp from what I heard. We've lived here the longest I think.

You are selling? I've been busy and haven't read that yet.