Earlier this morning the Pres was telling me that the Realtor had called with a few questions a woman from England had about the property.  You see, our Realtor not only listed it as "residential" but also as a "farm" because of the twenty acres, barn and creeks.  So, with that in mind the Pres made a statement, as his bare feet twitched back and forth in the recliner, "I think I'll clean out the barn and burn that brush pile today." 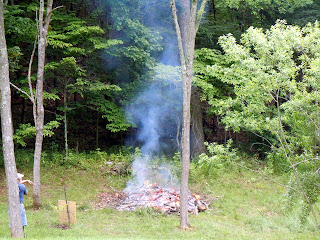 Smiling inside, because that brush pile has been around for several years thanks to my making it bigger and bigger, I waited for the sound of the recliner to go to the "sit" position.  About fifteen minutes later, I heard it and saw the Pres emerge from the Oval Office Family Room.


So outside we went and began dragging brush, adding it to the existing burn pile which was pretty big to begin with.  Then much to my surprise, the Pres hooked up the trailer to the ATV and headed towards the barn.  It didn't take long for him to fill three trailer loads with scraps of lumber that had been neatly tucked away by the previous owner.

As I drew in a breath, the smoke filled my nostrils and in no time at all, all those limbs, branches, clippings, and pieces of lumber were nothing but ashes, amending the soil.  Yes, now it was time to take a nice hot shower and sit enjoying the remainder of the day.
Posted by Unknown at 5:31 AM

So, let me get this straight. All you had to do to get your hubby to get rid of the rubbish was put your house us for sale?

Ok, that's it..house is going up for sale. That brush pile is out of here! ;)

Hello from Tennessee. I am a new follower and absolutely love your home!

Isn't it amazing how men like playing with fire! My husband is going to to the exact same thing today, to get rid of some downfall from the resent storms.

happy for you it is all gone bye bye. the smell of smoke is heavy here, but scary not good. Florida is so dry we have been under fire alert for months now, there are currently 4 brush fires in four counties and our back yard stinks with smoke. we need rain desperately.
I am thinking the UK lady has no idea what farm is here compared to the UK. did your realtor post photos on line

You are going to get everything all tidied up and then decide to stay.

I have a growing brush pile too. Glad yours is in ashes. It is always a relief to have that type of thing taken care of.

It's nice to get things done that have been waiting for a long time like that. My husband finally cut up a tree that he cut down last year. He burned some of it last night in a fire.

yeah, we're too dry and windy to burn safely most of this year so our brush pile just gets a bit larger. someone was burning in the woods behind us yesterday and it made me nervous... winds are too strong to be safe.

My burn pile is home to a family of sweet little rabbits and will not get burned until they move out.

That Pres. is coming right along with all his hard work. He will need the afternoon off.

O.K. I'm so far behind with all your posts I don't think I'll ever be able to catch up. You place is up 4-sale? Where are you going? Sounds like you are very busy.. At least you have the Pres. out of his chair.. I have some huge brush piles in the pasture that need burning.mm-m- wonder how I can get my Pres. out of his chair without putting our 40 acres up for sale.
The challenge of motivating them to get something done is hard to do..
Have a Tiggeriffic Day~ ta ta for now from Iowa:)

If smoked filled my nostrils and lungs I'd be choking - you are a hearty woman!

I love the smell of a wood fire. It is way to dry to burn here though.

oh yeah! the burn pile!
one of our favorite pastimes...as it seems there's a never ending supply of downed branches to add to it...

BUT it can get a little out of control if you're not careful...when that pyro in ya wants to take over...