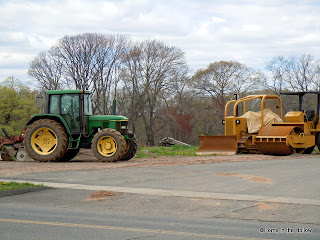 Did you know that not all "farms" have animals?  Just to prove that I really do know what I'm talking about, I brought along a few pictures. Let the story begin...

This is only some of the equipment owned here at the "farm".  When I travel to Connecticut, one of the things I enjoy is going to see friends who are like family to us...friends who own and operate "Zentak Farms," their wholesale business.

Paulie took over the operation from his Grandma about thirty years ago.  They sell an array of vegetables (corn, tomatoes, peppers, eggplant, beans ,beets, collard greens, yellow squash and zucchini ) as well as a wide variety of annuals.


The original "stand" was manned by Paulie's wife, Donna, back in the day when we lived in town.  It was about 12' by 12' and became what you see above due to customer demand.  Paulie was always so generous towards me and gave me tons of plants each year for my back yard.  Learning a lot from him and his wife about gardening, I always get such a charge out of seeing the insides of their greenhouses.

This is one of the twenty greenhouses they have on "the farm" as it is called by friends and family.  In fact, when my son was sixteen, his first job was working for Paulie, who wanted to make him a foreman.  However, my son had other ideas and couldn't juggle the classes at school and a full time job.


Although empty in this photo, the cooler is generally chock full of the plants that need to be kept cold.  Tulips, Hyacinths, Lilies, Daffodils sit on these portable racks waiting to be loaded onto pick-up and delivery trucks all heading to market.

Paulie has always been nice to me...polite, gentlemanly and considerate.  In exchange for one little hug this year, he gave me six flats (54 pots) of leftover Tulips (yellow) along with eight pots of Easter Lilies which he wanted to send home with me.  Planting the lilies around one of my feeder poles in the front yard, I've yet to decide where to place the remaining Tulips after giving half to my neighbors, Melvin and Jesse.

Last year, Paulie had a "few" flats (24) of Grape Hyacinths and at least ten pots of Tulips left over.  He said, "take them home back to Virginia with you."  I not only gave some to my neighbors, I gave them to members of the Garden Club and even donated some to Booker T Washington Park.


This "farm" tale is quite simple really and yes, there is a message.

Pass on the generosity that is given to you.  It makes everyone smile!