I'm no detective.  I mean lets face it, gang, I retired from the banking industry, so my qualifications and credentials certainly are lacking when it comes to a "who done it" situation.  However, to be fair, I'll give you the facts and you, the jury, let me know if you draw the same conclusion.

FACT:
You know how you can tell when something is wrong...or maybe it's just that something isn't quite right?  That's just what happened the other morning when I took the kids (Moon and Copper) outside.  Moon's body language told me that Copper was not feeling himself.

FACT:
Although I'd picked up on the visible signs, his mood was the real indicator.  He was not interested in playing with Kong (now that in itself is scary!) and was not interested in breakfast (although he wolfed down his morning treat).  I watched him closely for two days ensuring that he was chewing on that side because I had actually wondered about an abscessed tooth. 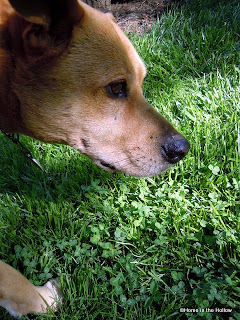 FACT:
But, chew he did and after the first full day, he was back to his old antics, which I felt was a good sign.  The bump shrank and once it looked less sore and more touchable, I examined it.  This time, he was more than willing for me to touch it and look inside his mouth.  But there was fur missing.  The bruise on the corner of his mouth was gone and apparently the antibiotic helped as there was no sign of infection.  It was all good but I still continued to wonder what he'd gotten into or tangled with.

HEAR SAY/OPINION (with a few incidents to corroborate statement):
Now, if you haven't figured this out by now after reading about him, I'll tell you straight out.  Copper has what I refer to as a "personality disorder."  He is fearless, very inquisitive and a little thick,which, as you know, can be a bad thing sometime.  He is also VERY protective of his kingdom when it comes to outsiders.  He's not fond of trespassers.  Got the picture?

FACT:
Strolling along the creek, I noticed that the weeds grew so tall while I was away on my road trip.  In fact, I thought, Gosh, it's time for me to dig out the weed eater again!  Then, watching Moon and cautioning her to be careful, go easy, I spotted something lying in the creek just beyond the lush grass.  It could hardly be seen from the hill near the barn so I went down to the water's edge to get a better look.  It was large, grayish, furry and motionless.  It was a raccoon.

VERDICT:
He tangled with the coon and got torn up in the process.

FACTS:
According to the Vet, rabies is not a worry at this stage of the game...thank goodness!
I can hardly wait to get the bill!
~~~~~~~
I'm bring this over to Amy's for Farm Friend Friday at Verde Farm.
I can hardly wait for the jury to decide this one!
Posted by Unknown at 5:09 AM

Yikes!! So glad that's all that happened to poor Copper. Coons can really mangle a dog.
Heal, buddy, heal!

So long as his rabies shot is current, you're good.
I will say that my farrier mentioned the other day that there have been more rabies cases than usual this spring. He always knows the scoops on stuff like that, because he's wise and gets around a lot.

I was guessing a tangle with some critter -- poor doggie! I'm glad he's doing better. :)

i was guessing snake bite, since our Jake is just like him. he will attack any critter than comes in his back yard. about 2 years ago, a mother racoon climbed over our six foot privacy fence and Jake attacked and they fought like tigers, hubby was trying to break them up and neither would give up. he hit the raccoon with a shovel and grabbed it by the tail and slung it over the privacy fence (note we live in city limits)and that raccoon came back up over that fence like it was not there. since he could not get them to stop fighting, he ended up killing the coon, which broke his heart since we like them. so glad copper was not injured worse.

my 'kids' tangle with them at times too. louise is sporting a small hole in her ear (healing nicely) and a scrape on her lip too from critter wrangling in the neighbor's creek. i think it was a raccoon too.

Copper and coon's!yikes.Glad you had copper checked by vet,that must have been a scary deal!

I'm glad Copper's okay now! These furry lovable ones are good at keeping their humans on their toes, right?!

I'm glad Copper is okay - wish he wouldn't be so brave though. That was scary. AND $$$.

I'm glad Copper is okay. Coons are bad news and there doesn't seem to be a good way to get rid of them.

Glad he is alright. Always a worry that the doggies will tangle with something that has rabies. ugggg

It's always something, isn't it?

I've seen raccoons and even coyotoes wandering around in daylight looking drunk, always afraid my critters will tangle with one of those.