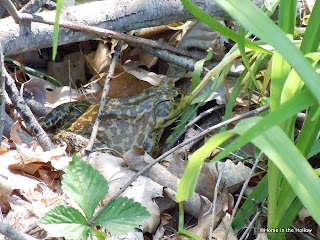 This past week, the Hollow was a virtual cornucopia for life's simple pleasures.  As I dumped the clippings near a thicket along the creek, I felt as if something was watching me.  Sure enough, this big guy was spotted!!  He was huge, slimy and appeared as if he was ready for undercover work.

Much to my surprise, I was able to run in and grab the camera only to find him waiting patiently for me. 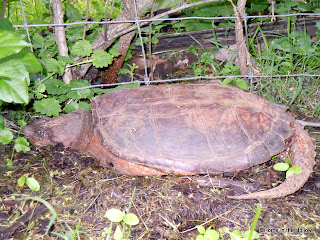 Then, the next morning as I walked the yard with the dogs, I saw a large brown mass near the fence.  Even Copper approached with caution which was quite surprising for my boy.

It, too, was enormous...biggest Snapping Turtle I ever saw!  Once I was able lift him up and over the fence line, I thought for sure he'd head toward the creek.

Watching him slowly ascend the huge hillside and veer to the left, following the deer trail into the back woods...one step at a time, I was amazed by it's tenacity.  Meanwhile, other activity was taking place as well. 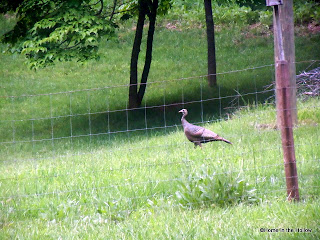 Venturing out of the woods, the first was soon followed by a second, a third and fourth.   Picking through the grass, searching for grasshoppers I imagine, they remained close to the edge of the clearing. 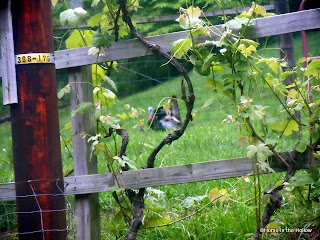 Then this guy showed up...strutting his stuff in front of them all!  Of course, you know how turkeys are and their ability to spot things.  I had to take this shot from inside the garage to avoid disturbing him.