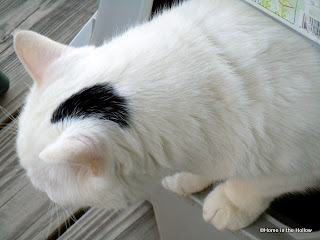 Meet C.A.T. (pronounced Cee-a-tee), who belongs to my daughter.  Although this picture of him stepping out of the litter box doesn't do him justice, I was trying to show you just how large he is (using the entrance to his box as a point of reference).  He literally can just about fit in his litter box and he is NOT overweight, according to the Vet.  He is just a big kitty but oh, so handsome and gentile.

He had a brother, D.O.G. (pronounced Dee-o-gie), but he had to be put down a few years ago.  He was a big boy as well.  They were adopted from my former Vet who wanted to keep the brothers together.