Quickly I readied the camera to capture this creature from beneath the sea as the three young locals standing on the cliffs high above the water welcomed us. Asking them if I could take some photos, they responded politely, “Yes, Miss.” (I melted inside when I heard that!)

It was about five feet long and weighed, according to the boys, eighteen kilos.  That’s nearly 40 lbs! With the hook still in it’s mouth, it lay there wriggling and squirming ever so slowly.  I could see the fine razor sharp teeth along both the upper and lower jaw.  It was a deep, dark jungle green and had a fin that ran along the entire length of it's body.  I sheepishly reached down to touch it.  I never felt anything so slimy.  The boys brought over the plastic seat bottom of an old chair that they sat on while fishing.  When they put it NEAR it's gaping mouth, it quickly slapped it’s powerful jaws shut, clenching relentlessly.  I think it could crush and mangle anything in those powerful jaws!  It was a Moray eel...smaller than the one they caught last week!  They would eat it “sushi" style. (No comment.) 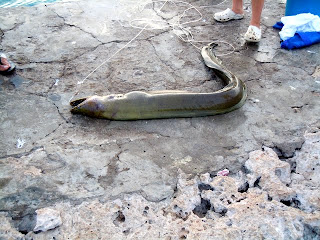 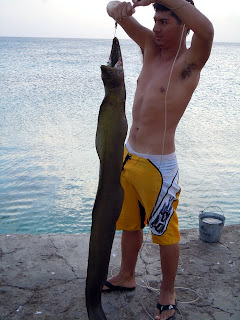 Leaving right after dark, we saw the boys on the cliff building their fire...not near the gas tank or a tire I might add!

Although the original plans were for the sunset, I only got a few shots in before all the excitement began with the boys' "catch of the day."  However, I wasn't disappointed because while I was checking out the eel, the clouds had rolled in and erased all chances of the sunset.  I'm sure I'll have the opportunity to enjoy a sunset another time, another place...:).  After all, the sun shines on us more than we realize.
Posted by Unknown at 5:13 AM