Placing the disposable grill in the grocery cart, I was hesitant to say the least. Although I had never used one, my daughter assured me that it worked ‘just fine‘. Made of tin foil with charcoal briquettes on the bottom, all that was needed was some starter fluid. At least that’s what the instructions said. It was our second Sunday in Aruba and the decision had been made that the four of us would go to the beach that evening, cook out and watch the sunset. That was the plan.

Deciding on pinchos, some leftover fried shrimp and pork ribs to go with our baked potatoes and reheated sauteed vegetables, we diligently packed the food into the disposable cooler. Plastic plates, napkins and silverware all tucked neatly in a bag along with the salt and pepper, we were on our way.

Arriving at a beach on the other side of the island, Angel and the Pres immediately lit the “grill,” as my daughter and I got the food out and arranged our plates on the cement benches under the grass hut. However, none of us planned on the wind being quite so strong. Before I knew it, the decision had been made to move the grill (as it was in flames, no less!!) near the rear tire of the car, which would shield it from the gusty trade-winds.  Are you kidding me?  Put it right near the gas tank?  And so it was.  Perhaps you can see the edge of the tire in the photo. 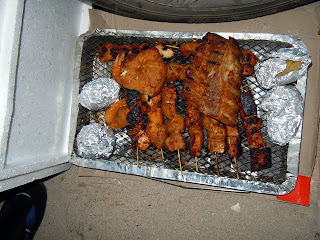 Angel had headed down toward the cliffs and the water while the Pres manned the grill.  Before long Angel came back waving frantically, hollering “Forget the sunset. Get your camera, Mamacita!  Wait until you see how big this thing is!  Follow me.”

Heading once again towards the cliffs, he walked hurriedly along the jagged coral.  Following him as closely and quickly as I could, I was falling behind and kept telling him to slow down. In case you've never tried it, walking across coral is NOT an easy task whereas twisting an ankle is.  Yet before I knew it, there it was. Oh my! I had NEVER seen one of these before!  Holy moose-poops!  It was HUGE!

to be continued…
Posted by Unknown at 5:32 AM

Curious. Does JP stand for Just (be) Patient? ;)

Dang! i do hope you got a photo of whatever it is. waiting impatiently.

I guess disposable grills don't come with a wind shield!

I don't even want to ask, but who is watching the grill?

and as Beverley mentioned .. who was watching the car go up in smoke??

MUst begin with Q. Gee I am glad I wandered into the A-Z challenge here today. NOw I have to go back and read. I will have to think about that. I have done all my Q entries and I can't think of one thing that would be BIG. See ya soon. FOod looks yummy. Too bad you don't have a scratch and sniff sticker on it so we can smell the good food.

Ha...placing the grill next to the tire sounds exactly like something my husband would do. Can't wait to see this huge "thing"!

Sounds like a great PARTY! The food looked really good on that disposable grill! That was awfully close to the tire for me! I hope you seen a whale! That would be cool!

I think you should start writing a book.. It would be a new way of writing,,,write a book and then leave one hanging in the air and you won't know what is going on until you buy the next book.
LOL...I always get hooked in reading your post as fast as I can and then I'm left falling over the cliff.. dangling on a lonely branch.. Yikes~! I'm running out of muscle,,hurry and get to the next part.

Ta Ta for now from Iowa:) Have a Tiggeriffic Day~!

OMG (sorry for the abbreviation)! That is the most sumptuous picture of food I've seen yet! It's 11 pm, but I am absolutely starving.

but hey! the food looks great...can i eat while waiting?
moose poops? in aruba? i didn't know there was moose in aruba....

I stopped in off of the Sunday Best post. I am afraid this could turn into one of those addictive blogs. I am afraid it is too lat though. Now I have to come back to see what was big enough to elicit "Moose Poops"!