Making our way across the island, through San Nicholas, we were almost to our destination.  Heading to the Northeastern quadrant, we hoped that today we would see the wild donkeys.  Of course, my daughter and Angel had seen them numerous times and I must admit that I jumped at the chance when they extended the invitation.  Not interested, the Pres remained at the resort, basking in the sun.

Protected by the government, according to the locals, the donkeys are tagged, then released into the wild once again, left to roam and graze freely. 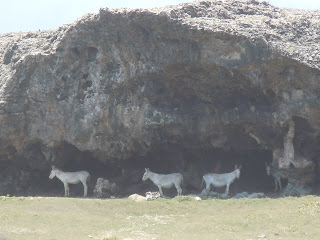 Taking shelter from the hot afternoon sun, they were a bit reluctant to come towards us at first.  Apparently, however, they remembered the taste of dog biscuits that they'd received last week from my daughter and Angel and eventually headed in our direction. 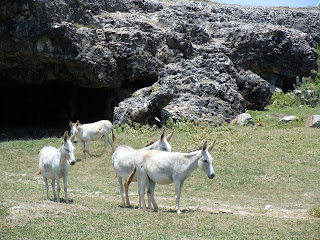 I couldn't help but wonder what they drink for fresh water though since the rocks and cliffs are located so close to the ocean on the North side of the island.  Facing Venezuela, the South side is only about about fifteen miles away.  A native Aruban told me that a man tried to swim from Venezuela to Aruba attempting to leave his country.  Unfortunately, his body washed ashore on Baby Beach, which is where we snorkel each year.

P.S.  I'm bringing the donkeys with me to Amy's at   Verde Farm for her Farm Friend Fridays.
See you there...:)
Posted by Unknown at 5:14 AM

I had totally forgotten about the donkeys in Aruba! They really are so sweet and look different than my donkeys. I'm guessing the Pres has a great tan.

They look bigger and lighter than the donkeys we see in our 'hood.

That must have been so nice to see they are beautiful donkeys. That story at the bottom is very sad though. B

They are so beautiful!
Lx

they're sweet! i hope they have a good life there!

Wild donkeys can dig four feet down in the desert for water. They are one of the smartest animals around and great survivors. After getting to know them, they have become my favorite animals. I admire them so much.--Inger

OH how neat is that! Just being in Aruba would be wonderful but to see wild donkeys and have them come up to you for treats makes this extra special! Thanks for bringing the donkeys along to FFF! Enjoy the rest of your vacation :)
Maura :)

Wild burros, horses and donkeys can survive almost anywhere. I'm not sure if they're still in the area but they used to run wild in Big Bear, Ca.

They must be finding what they need to survive. Amazing how animals can adapt. :)

All you notes from the trip are so interesting...love the photos of the donkeys. Too bad for the man who tried to swim. How hard to want to leave your country that bad. 18 miles is a long way to walk much less swim. It looks short on the map, I guess....

Very interesting and they are so beautiful! Speaking of beautiful... what are the shrubs that are are the edge of your yard? I'm guessing rhododedrons? I wonder if they would do well in our climate.