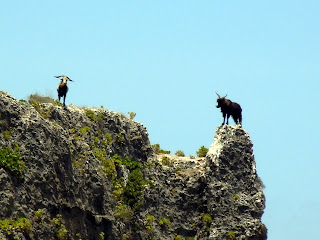 Just as they promised, we got in the car and headed for the other side of the island.  My camera was ready as we approached the huge cliffs.  Almost immediately, my daughter said, "Look Mom.  Look over there...way on top."

Jousting on the steep slope were two large goats, horns locked, heads waving side to side!  And they
were everywhere!  Goats grazing on the parched dessert like brush, climbing the rocky ledges as if they were mere mounds of sand, making their way to safety to the higher elevations. 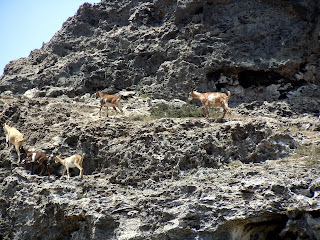 They are wild, according to the locals, left to fend for themselves other than an occasional visit from tourists like us, and are protected by the government. 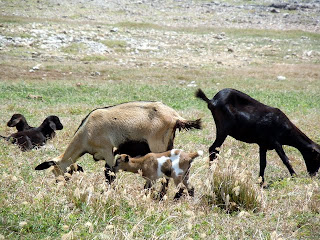 P.S.  Although I haven't been to Angela's WVTreasures for her Tuesday's Show & Tail  in a few weeks, I'm bringing this post with me.  It will be good to be back.  See you there!
Posted by Unknown at 5:28 AM