Generosity comes in all shapes and sizes even here in Aruba. Although the breeze is constant here in Aruba, everyone can use a break from the sun.  And so it was.  It was time to get out of the sun.

On certain days of the week, there are activities around the pool area at the resort. Water aerobics on Monday and Wednesday mornings is an absolute riot!  Friday afternoons hosts a Yoga class.  Several days a week, there is BINGO. When Alicia (a new friend) made the announcement over the loudspeaker, I went to the room and got a few dollars so we could all play.

Waiting for the game to start, a mom and her two children asked if they could sit under our hut with us. The first two games finished and the winner of both was the young girl. She had won a free ice cream from the resort’s store for the first game and a free pizza on the second game! Coming up was the third game, a “free” gift from Alicia to everyone that had played the first two. 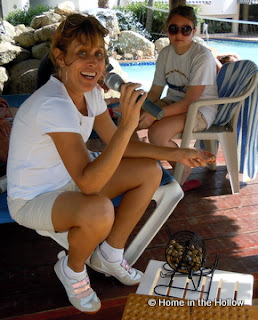 The numbers called filled my board quickly and I needed just one more…B13...to make BINGO. That was going to be my lucky number...B13.  She continued calling out numbers and then out of her beautiful Venezuelan smile it came! B13! Raising my arm and waving, I shouted out “BINGO” as she turned towards me, smiled and said, "Ah, my lady...my snorkle lady who looks for sharks...yes!"

Walking over to me with the prize bag in hand, she urged me to reach in. I selected the orange plastic egg first becasue it matched my bathing suit, second becasue it was the only egg left in the bag!  LOL!!  Opening the bright plastic egg and then unfolding the small note inside, I read aloud, "FREE - ONE ORDER OF CHICKEN WINGS (from the resort)".  Everyone clapped.

Walking over to the young girl, who had won the first two games, I reached out to hand her the note. She kept saying "No, you keep it."  Then suddenly the Pres (aka my husband) said, “What are you doing?”

I responded, “I thought that she would enjoy this too along with her other prizes.” The look on his face told me otherwise.  With that, the note was folded and tucked away. Two lessons learned: some people are not as generous as others; B13 is, after all, my lucky number!...:)
Posted by Unknown at 5:33 AM