By the time we got through customs, it was late Saturday afternoon here in Aruba and we were pooped.  So, that evening rather than hitting the grocery store, we ate at the resort.  It was the best I've tasted after coming here for six years.  The Pres had Filet Migon and I had their Coconut Shrimp.  The portions are so generous that I had to take half of mine back to our room and eat it the next day for lunch. 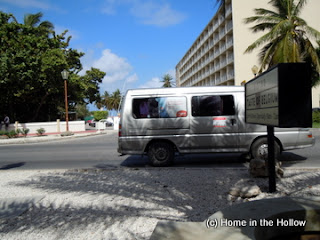 On Sunday morning after eating breakfast at the restaurant here at the resort, we walked across the street to catch the bus.  One of the local Mini vans stopped to pick us up.  There were five people on board counting the driver.

Driving down the "main road" heading toward the groceryt store, our driver stopped in front of the Playa Linda, another resort.  There were ONLY nine people who wanted to get on.  Yep...you guessed it all nine climbed aboard.  That gave us a grand total of sixteen.

As we once again began driving and neared the grocery store, you could feel the bus leaning...no...tipping to the right!  Of course, we were all laughing and joking about it!  Stopping in front of the grocery store, everyone got off except the original couple and the driver.

Our new found friends walked with us crossing the parking lot to get to the store front.  Everyone (well almost everyone, is very friendly and laid back here...both locals and tourists) joked and laughed as we looked for various items in the store.  Lets see, Jim, his wife and two daughters are from New Hampshire, as well as Mike and his wife, Linda.  There were two gentlemen from Holland that I chatted with as well. 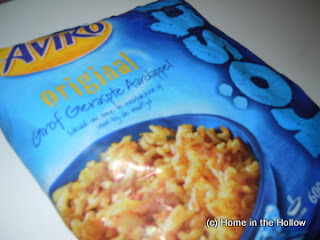 Aruba is a Dutch Island and I always find it helpful to make friends who speak/read Dutch as many things in the grocery store are in Dutch.  For instance, I needed to find frozen hash browns.  Good luck with that!  Asking one of the men from Holland, he told me to look for something called Aardapple (which means apple of the earth...hence potatoes!!!).  Success!!!!

It's always nice to learn new things, don't you agree?  And to think, it was all becasue of a BUS!
Posted by Unknown at 5:07 AM

It is nice to learn new things, (I just did with the potatoes!) and I think along with meeting people, that's what makes part of a trip so memorable!

Once all of you had your purchases did you all squeeze back on the bus together? Sounds like a blast.

Wow, you just reminded me of my French-pomme de terre....or something like that. Anyway, the meaning is the same.

All I could think about while reading this was the movie Romancing the Stone and that crazy bus!!!!

Hope you're having fun :)

I think it has less to do with the bus and more to do with your love of people, JP. ;)

I think potatoes must get more respect there. Thank goodness for pictures on the packages.

ARUBA!..wow I can't get past the fact that your posting in ARUBA!

I'm soooo jealous, hope you and the Prez have tons of fun.
~JO
LazyonLoblolly

Still sounds like it was so fun, more like an adventure. That's neat, what they refer potatoes as to there. I'd have to go looking at the pictures on the bags.

i love apple of the earth, thanks for something new learned. glad you are having a good time down there

Loved your bus story, one of the great things about a vacation, it always feels so relaxed and happy!!
Found you from the A-Z Challenge, looks like it’s going to be a lot of fun, with maybe a little bit of stress thrown in!! I’m now following you on GFC and I hope you have a chance to check out my blog!
Monica
http://oldermommystillyummy.blogspot.com/