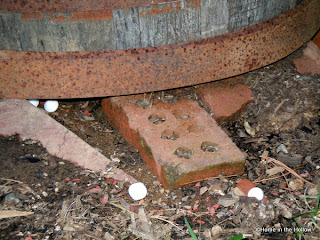 Remember I told you how I put moth balls in my perennial gardens to deter rodents and snakes and that I put some under the rain barrel located on the corner of the house?  Well, each morning, when I'm outside and pass by the barrel, a few moth balls are pushed out towards the lawn.  Today I think I saw the little critter that has now become my nemesis.

Tail bristled as he ran along the top railing of the fence, he was in the clear before Moon, who was in hot pursuit, could even get a good whiff of him.  I say HIM because men always give me a hard time!  But, don't you worry, I'll get that little varmint!  Personally, I think he came from The City Beneath the Garden which is where, I'm sure, he has his recliner and remote!! 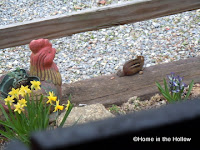 A few hours later, after I was finished working outside, I walked in the bedroom to add something to the suitcase.  As I peeked out the bedroom window, there he was!  Pulling the camera out of my backpack bound for the Caribbean, I got a few shots as I zoomed in on that little devil. 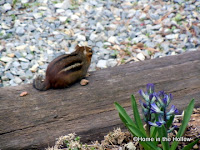 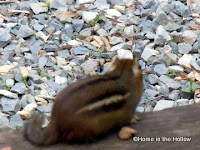 Tell me something.  Is it my imagination or is this little "guy" a little on the hefty side?  Of course, he could just be big boned, but do you think HE could be a SHE?  If that's the case, just think...when I return, I'll have a nursery next to the City Under the Garden!!!!  LOL!!)