Although this is definitely not my favorite topic, they do exist.  They do live here in the Hollow and since I've been here, I've learned a lot about the little devils.  Knowing that snakes like rodents, I had this bright idea that if I eliminated the rodents, I would reduce the number of slithery creepy crawlies.  Sounds logical, right?

So, one day when my friend, Lisa from Two Bears Farm stopped by, I was telling her how each morning when I came around the corner of the house I would see a shiny black snake with a ring around it's neck poking his head up out of a hole.  Reassuring me that he was not poisonous, that he was one of the "good" snakes and being oh so knowledgeable in so many things, she suggested that I give Moth Balls a try. 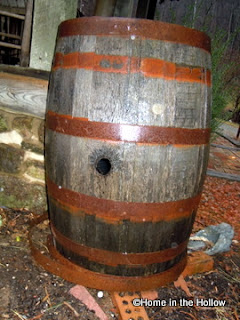 Since then, every year just like clockwork, early in the Spring, I sprinkle Moth Balls in and around the beds.  Of course, while sprinkling I couldn't help but notice all the holes, so I decided to fumigate them as well.  Dropping balls down there holes, I made my away around the flower beds.  I even spotted this little escape route under the front rain barrel.  Thinking I'd be slick, I droped a few balls down the hole you see on the side of the barrel.

Guess what happened?  A few days later, there were five moth balls pushed out from the entrance!  Some little rascal apparently is fighting me on this.  It's become almost a daily battle.  I pick them up and put them back in the hole of the barrel.  He (and I have to assume it's a male because it's giving me such a hard time) pushes them out of the bottom.  See what I mean?

So, my battle with the snakes, oh now that will have to be another story!

Did I ever tell you about the time...

P.S.  I'm linking up with Lisa today at Two Bears Farm for her Memory Lane Fridays.  I haven't been there in a while so I've been missing out.  Stop by. She'd like that.