This past Monday, while I was outside giving Moon and Copper their breakfast, I heard an excessive amount of chirping going on.  It was so "busy" and loud, to me, it sounded like someone was really upset in the bird kingdom!  As I looked around, I saw the Goldfinches perched high in the branches above me.  It wasn't them.  Nor was it the Nuthatches or the Titmouse.  As I looked in the direction of the chattering, which honest to goodness was incessant, I spotted the culprits.

I had two pairs of Eastern Bluebirds shopping for homes.  One pair, who was not squabbling seemed to have selected their box without much bantering.  Both were swirling and twirling in the air around each other.  They were in love...you could tell!  It was absolutely adorable!  However, the other couple was apparently torn on which box they wanted along the opposite side of the fence line.

Oh my!  The female was just chirping away as if she were trying to "sell" him on the first house.  He just didn't want to hear it and chirped louder and louder, never giving in!  I couldn't help but laugh right out loud!  I was mesmerized by the whole episode.  I just stood there watching in amazement.  In a tither, she flew from the fence and landed on the roof of the box.  Reluctantly it seemed, he gave in and flew to the box.  Again, the chattering...back and forth.  When was the bickering going to end?

In a huff, she flew off into the apple tree and sat on a limb.  He followed.  Then, they both flew off to the  second box.  Once again, she was ranting and raving (if birds do such a thing).    The next thing I knew, they flew off into the woods, away from both boxes!  I thought for sure, they were heading for divorce court!  I almost wanted to shout out, "get a good lawyer, honey!"  But I refrained.

On Tuesday, I spotted the happy couple once again.  No, not the first couple...the ones who made their decision without much of a discussion...they were already collecting dead grasses and seemed to be enjoying  marital bliss!  By the happy couple, I mean the couple who reminded me of The Honeymooners, Ralph Kramden and his wife, Alice.  Well, apparently Alice won the battle, because they were very "lovie dovie" and busy gathering dried grasses as well.  Then I watched intently as he headed over to the feeder to catch a free lunch while her back was turned.  She was inside the box working!  Always an opportunist, that Ralph! 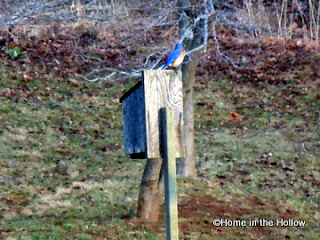 So, here's Ralph with a full belly, sitting on the home she chose.
Where's Alice you ask?  You might want to look up because I heard him say to her...
"POW, Alice, right to the moon!"

P.S.  I'm linking up with Verde Farm for Farm Friend Friday.  Hope to see you there!