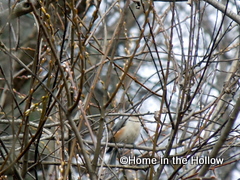 Last week, I decided that I should put out a few new bird houses and then attempt to do a few minor repairs to some of my existing ones.  While I was repairing (actually trying to save is more like it)  one of the nesting boxes,  I looked up and saw this sly devil...just sitting in the thicket near the edge of the creek...waiting...and waiting.  He sat there the whole entire time.  I think he was waiting for me to finish the repairs to see if they met his expectations.

Here in Virginia, the Eastern Bluebirds winter over.  I have several nesting boxes for these cheerful bunch.  Most of them are on the fence posts that are on the outskirts of the field. 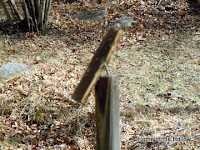 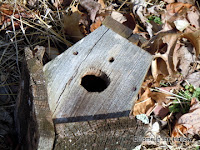 This particular box, is near one of the creeks at the base of mountain.  It has been very popular with my friends for eight years.

When I spotted it, the box was literally tilting to the side because one of the screws had come out of the foundation!  That's the top of the post with part of the floor still hanging on.  A few days ago, the Pres said that would make it another season even though it was lopsided.  But, thanks to the nasty winds we had the past few days, today the box was on the ground!  Obviously, it needed immediate attention.  While working on it, I noticed that one of my fine feathered friends had modified the original design of the home. 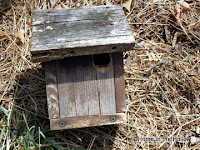 As you can see, they've added a window on the South side...probably to catch those warm southern breezes that flow here through the Hollow.

But then, when I picked the box up off the ground, I noticed that they are apparently looking for cross ventilation (probably to reduce their monthly AC bill!) because... 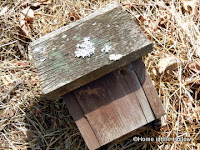 They had begun some exterior work on the North side as well!
Anyway, realizing that I needed an entire new floor, I had to ask the Pres to get out the saw.
Posted by Unknown at 5:33 AM