Alva's Out of the Closet 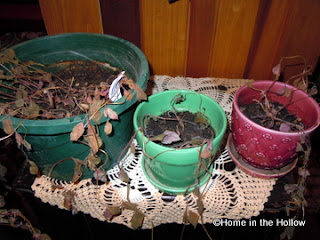 Taking Alva out of the closet, I remembered that a few weeks ago, I did a post about "Alva," (something ugly that became a thing of beauty Aunt Alva).

Since several of you had expressed an interest in Alva, I thought it would be nice to show you the real thing.

See all the dried leaves and how scraggly all the stems look.  Since it hasn't been watered since last fall, the dirt is as hard as a rock.  But, then again, you would be too if you hadn't seen any sunlight or had any water in six months!

So, the next thing I have to do is very carefully and ever so gently, remove all the dead stems without disturbing any of her roots.  I'll give her a nice drink and put her on the table in Moon and Copper's room (aka my porch) so she's in indirect sun for now.  As she grows, I'll try to remember to take a picture or two so I can show you her progress.
Posted by Unknown at 5:28 AM