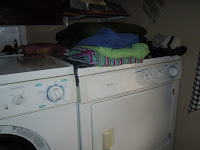 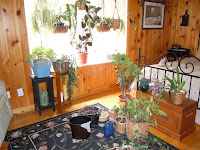 This past Sunday, before I was distracted by my afternoon nap and the fire, I was a busy beaver!  After walking the mountain with the dogs, I came back to the house, and started some laundry.  (Don't laugh at my polartec jammies!  There are VERY warm & toasty!)  In between doing laundry, since we women can mulit task relatively easily, I decided to tear apart the master bedroom as well.  That meant taking down all the plants off the hangers as well as off the seat of the bay window, washing it down, etc., etc.  While the window seat mat was in the dryer, I went outside to tackle a project that I wanted to get out of the way before warmer weather hits the Hollow.  I try to keep the place picked up because in my mind, it reduces the number of hiding places for those crawly, slithery reptiles that I'm not fond of!

I wanted to pick up, move and toss some of the "junk" laying around.  I mean, after all, it's been here since we moved in.  That was eight years ago!  The Pres was in the house reading the paper in his chair when I began this, what I thought would be simple, task. 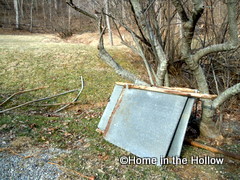 I really thought that dragging these old metal roofing sheets, that the previous owner and just thrown in the woods, would be easy to drag.  But they weren't.  They still had the roof nails so it was like dragging a rake through the ground.  I was able to get them down to the driveway, but then I had to go in and insist that the Pres come out and give me a hand!  Then, see those pipes to the left.  I found those in the woods too.  They're cast iron and were really heavy.  I had to drag them.  Yep, just last year, when "we" cleaned the yard, the Pres was supposed to take them to the dump.  Apparently, he decided it was just easier to toss them in the woods.  It was probably to keep the metal sheets company.  That's my guess!

Oh well, just like Scarlet,"tomorrow is another day! I'll think about it tomorrow."
Or maybe not.

P.S.  Did I ever tell you that I want a Clark Gable to come and sweep me off my feet?

Polar tec is wonderful...I use a piece of the fabric as a throw to keep me warm while I read in the kitchen. I doubt I could sleep it in though. We usually keep the window open a crack....I like cool when I sleep.

If we couldn't multi-task, the world would come to a complete stop! I think my Pres enjoys seeing me out dragging limbs out of the yard....I just do it and then leave it in a pile and it is his job to load it and take it out back to the brush pile....it usually takes a prompt or two to get that done.

You have the touch with houseplants....and a great window for them too.

Your houseplants are lovely JP! You were very busy indeed. A few less places for the reptiles to hide in!

I don't dare tell my husband about the sheets and the pipes -- he might ask you to mail them to me so we can add them to our stash. So you see, it could be worse! :)

When you get done there, I have some things that need doing here! :O)

LOL, I agree with Nancy! If Paul knew he'd probably want to put them in the basement with the rest of the stuff he's saving. Although, I confess that since we watched season 1 of Hoarders he's been tackling the mess. Now I just need to get my hands on Season 2...

Men just don't seem to see things the way we do, do they?!

If I could find a man (Clark Gable) that actually did yard work I might think about getting married. Until then I really don't need the extra work.

I don't think the cleanup will ever be finished around here. Between what was left behind and the things that I'm not sure how we've added, it's a never-ending job. Good luck with that.

It is amazing how this stuff accumulates and sits around (FOR YEARS!) Oh I'm sure the Pres was thrilled you started all this...

Old roofing sheets and pipes? My Pres would be there in a flash. I swear I could have 3 houses built from all the junk he insists will come in handy one day. :)

Love those plants. It would be certain death for them in my house I'm afraid.

Would Clint Eastwood do? Remember the bridges of madison county...lol. The house plants are so pretty.I need to clean my flower bed out front before it get's much warmer too.Blessings jane

the wanna be country girl said...

It must be a "man thing" to collect and leave sheets of roofing metal in the edge of the woods. I've got a pile just like yours at my house. And yes snakes do love it. Manny turns it over every few days hoping to find his first snake of the Spring.
the wanna be country girl - Caroline

Man when you start to do a job - you do a job. One thing leads to another and then you have a GREAT BIG job.