The Story of a Boxwood 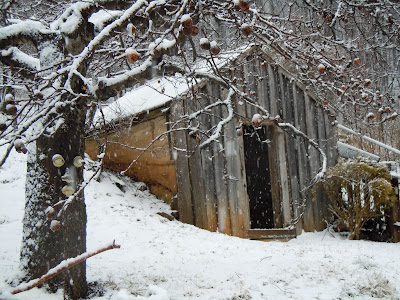 Okay, the Boxwood.  Well, one year the Garden Club I belong to was going to make Kissing Balls.  Hopefully you all know what a Kissing Ball is.  And someday I'm going to tell you how to make THE MOST BEAUTIFUL KISSING BALL of all...just remind me (in November).

In order to make the Kissing Balls, we needed Boxwood.  Now I did not have any Boxwood on my property, so I asked a bunch of my workout buddies at the Y.  I really lucked out.  Marshall said, "Why JP I've got lots of Boxwood and they are really overgrown, so if you want to come by, just give me a call."  That was on a Monday morning and I called him that afternoon.  He's in his early 70's, a real sweetheart, and very spry for his age.  We have a lot of fun together.  He and his girl friend hike, bird-watch, hawk-watch...they do a lot of "outdoorsy" things.  He is very knowledgeable too, as he's a Master Gardener and just became a Virginia Naturalist.

After I took the back seat out of the Wrangler, off I went to Marshall's.  Now "as the crow flies," he only lives about two miles away.  He's up and over the mountain...well actually a few mountains.  I got there and began to clip the Boxwood, stacking the branches in the back of the truck.  I was planning on bringing enough to the meeting the next day for all the ladies at the Club because a lot of them had said they didn't have it either.

And so I did.  On Tuesday when I arrived at the Church where we meet, they were all so tickled when I came in carrying bunches and bunches of Boxwood.  I sort of felt like Santa Claus, making them all happy and smiling.  It was a great feeling...making others happy!

One of my best friends at the Club was the one instructing us on how to make various things out of Boxwood and once again, I really lucked out.  Norma stood by me and kept leaning down whispering in my ear, "just do exactly what I tell you and don't listen to any of them.  Your ball will be the best!"  And so I did.  I only listened to Norma Jean and my kissing ball was the best!!!!  Now I make them every year and they look so beautiful hanging on my front porch and shed!

See, you've done it to me again...got me off on another story.  Now you'll have to come back to hear The Story of a Boxwood!