The Story of A Boxwood (cont.)

Now this time, don't get me off on a tangent!  So here we are, back at the Spring House.  Here's a picture of the inside.  That beam going across...it's bracing the walls. 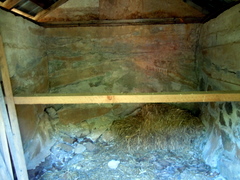 For the seven plus years that I've lived on the gravel road, there's been a bush that was always in the way as you round one of the corners.  Truly I had no idea what it was until I called Howard.   Remember my neighbor,Howard?  (In case you don't you can meet him by clicking My Life: The Neighborhood.)

Since Howard ran a nursery many, many years ago, I knew he would be able to tell me exactly what it was.  All I really wanted to do was remove it, making it easier to see around that corner.   So one afternoon, I called Howard and asked if if he thought I would get in trouble if I cut down "that bush" that blocks the view.  He said, " JP, why don't you dig it up and plant it.  You'd be doing all of us a favor as far as I'm concerned."    It was during our conversation that he told me it was an English Boxwood.  "A Boxwood?  Really?" I said.  Now, since I always like to help others out as well as myself, I decided to give it a go, so to speak

I walked down to the bush and began digging, and digging, and digging.  I'm not sure how long I dug before I decided to go home and get the Jeep.  Throwing a big chain in the back of the truck, I cranked her up and headed down the road.  We had just had a nice heavy rain so I knew that this would be a good time to put "relocation services" to work.  Oh, it's not the first time I've resorted to "relocation services" here in the Hollow.  I've transplanted many a forest fern from the woods as well as some Virginia wildflowers that are becoming rare.  They were all lovingly placed near the edge of my creek to flourish with me watching over them.

Anyway, I got down to the bush, wrapped the chain around the trunk and then hooked it back to the hitch on the Jeep.  I jumped in, put it in four wheel drive and slowly inched my way forward.  Finally I felt the tug and the jerk.  Good gracious!  I thought as I got out and looked at it.  The root ball was enormous for such a small bush!

There was no way that I could lift that sucker up nor was it going to fit in the back of the Jeep.  So, I did the next best thing.  Yep, I dragged it home.  Placing it in my big old metal tub that Margaret gave me, I filled it with water, letting it sit overnight.  The following day when I got home from the Y, I dug and dug and dug some more.  Of course, before I began digging, I had called Howard to get his recommendation on where to plant it in my yard.

So, that's the story of my Boxwood.  It now has a loving home and sits besides the spring house up on the hillside.  Actually, I've always wanted to make the spring house into a potting shed, but that idea has been vetoed by the President.
~~~
Kissing Balls?  You all want to know about Kissing Balls!  I was going to wait until November so you could make them right before Christmas.  And trust me, when I tell you they are the easiest thing in the world to make and the birds love them!!  The best part is, you don't use anything artificial, except the ribbon of course. This past Christmas, I had three sparrows that lived in it right up until...

see...you've got me going again!!!
P.S. And no, this is not the Kissing Ball I made. It's a "fake" from Google. I never took a picture other than on my cell, which is now long gone. So you'll have to wait again....haha!!