I went to the Post Office about ten days ago.  I needed to ask a few questions.  The Postal Clerk approached her counter with her usual smile.  I looked her in the eye and said, "I know this is going to sound strange.  Can you mail bones?"  Her eyes widened and her forehead wrinkled as she tipped her head.  I continued, "You see, I have a friend in Florida who loves bones.  She is so talented!  She makes all kinds of things with them.  And I know this may sound crazy but I know she would love them."  It was a done deal.  I just needed to get a box and, of course, the bones.

So last Sunday, I walked Moon and Copper up to the top of the mountain.  Yep, the bones were still there.  You see, I've had my eye on that carcass ever since the snow thawed.  I thought, I come back later without the dogs and carry them home.

So, later that afternoon, I once again hiked the mountain.  When I got to the top, I strategically planned my path.  Then I began to make my way over the edge and down the steep slope.  The bones were only about fifteen feet away.  Carefully securing my steps as I got closer, I stooped down and picked up the head, jaws, a few leg bones and then lastly the ribcage which was still connected to the spine.  My arms were so full that climbing back up was a bit tricky, but I did it.  Now I started my walk back down the road to my house.

A thought quickly flashed through my mind.  I hope I don't run into any of the neighbors carrying this!
No sooner did I think it and there, making it's way up the gravel road, was a Van.  Good gravy, it's the Preacher and his wife!  They slowed to a stop and the passenger window came down.  Shelly had a strange look on her face.  The Preacher's blue eyes opened widely as he said, "The dogs are going to like that."

"Oh, no." I said, "these are for a friend of mine who collects bones.  She makes the most beautiful things with them and I know she's going to be so excited when she gets them!"  They nodded in agreement, rolled up the window and slowly drove off.  I really wish I had a camera to show you their faces.  It really was quite comical.....oh Honey of Sam!!!.....I'm sure they thought that I've gone over the edge...and I don't mean the mountain!!!! 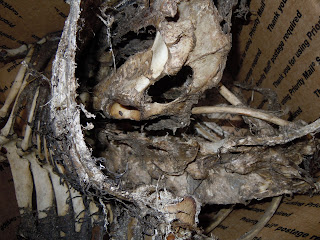 The movie "The Bone Collector" springs to mind!

Yes, of all the neighbors you could've met up with - you just had to run into the VEGAN family!

what a story. now i am just dieing to see what your friend makes, can we get a photo? does she do sculptures? necklaces? can't imagine... more info please. and i do so wish i could follow that road and end up at your wonderful most beautiful log home

Now tell the truth, JP -- the preacher and his wife did a "Fast and Furious" maneuver down the road, didn't they? ;) I would have gone with the dog bone story.

Oh I hope all the "stank" is off of those. Otherwise you'll be on the postal watch list for sure... :)

I've been on her site before. She really is a wonder! I especially love her bone photographs but hate the idea that she then just scrambles them for another day...

I think I am going to have to be more careful about you! lol sandie♥

You are a riot!. I can see you coming down the mountain with those bones, like nothing was unusual at all.

I think you must be my twin only parted at birth.. your adventures are a lot like mine. Loved the pictures of your barn with the snow..beautiful~! The bones story is so cool~!
Maybe next time you should take a pillow case to put your bones into.. and the best story is losing your keys.. I just laughed out loud~! Oh my goodness~! If I get out of my car and I'm going to be close to it, I put them where the windshild wipers are, that way I can find them right away.. I'm prone to lock myself out of my car with the keys inside. Oh you are so funny.. Thanks for the memories~! ta ta for now from Iowa...Have a tiggeriffic day~!

I also would like to see pictures of some of the things your friend makes. I find a hobby of making things with bones very interesting.

Going way back... do you remember the song "A Million to One"? Those are the odds of finding another like you.

You think maybe they could have 'aged' a little more?
I don't think I would have carried those in my arms.....
I was thinking of the white, sun-bleached things you see. What was it, do you know?

You will rise to the top of best friends list to do that!