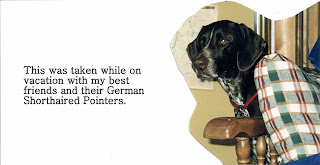 There are so many adventures that Kiera and I shared, I could go on forever.  We vacationed with my best friends and their GSPs in New Hampshire.

We took a "road trip" from Connecticut to Tennessee.  Ironically, we stopped at Hungry Mother State Park in Virginia on the way down because I truly was a "hungry mother" as we approached the exit sign!  Staying in a log cabin located in the Great Smokey Mountains and hiking each day was THE BEST!  We even happened to stop in Roanoke on the drive home to Connecticut, taking in the Farmer's Market.

We walked so many, many miles together both for pleasure and in so many fund raisers for March of Dimes (raising quite a nice chunk of change, I might add) and other walk-a-thons that my boss at the time gave us the coveted "Golden Sneaker Award"!!  In fact, in doing the Math, I estimated we covered in excess of 12, 000 miles over our years together!

In addition, we had our picture in the Waterbury-Republican newspaper for a contest we entered.  We wrote articles that were published in the Cheshire Herald as a result of a demonstration we participated in to promote the use of waste removal along the 10 mile trail we walked every weekend.

Then there was the time she got a 4 inch nail through her leg and paw.  She had landed on it while playing Frisbee one winter.  Apparently, it was lying on the ground in front of the shed.  Then, there was the time that she was so startled by the thunder and lightning, that she went through her Invisible fence.  I was told that a Shorthair can travel ten miles a day and for every day that she was missing, to increase the radius by another ten miles.  She was gone four days.  But we found her.  Limping badly, yet with no visible signs of injuries, my Vet said that the hot pavement had burned the pads of her paws leaving them raw.  Oh, and then there was the time, she opened the kitchen cabinet and ate several blocks of baking chocolate!!  Then there was the time I herniated a disc and she laid at my side for 13 weeks!