As Kiera grew that first year, I taught her to catch the Frisbee in mid-air, sit and catch her ball, sit and "wave" to people...that was one of her favorites.  The kids at the trail would love it when we did that one for them!  I had also taught Kiera to "dig it up" on command and believe it or not, she would help me dig when I needed to remove a rock buried beneath the earth's surface or when I was planting perennials.

Anyway, back to the story.  It was fall and one day,  we were out in the yard playing as usual and once playtime was over, it was time for me to begin my yard work.
Meanwhile, I was busy doing something and when I looked up, I saw her down at our shed.  We had our wood stashed there all ready for the up coming winter.  And, as you know, mice love wood sheds!

It just so happened that Kiera loved to chase, catch anything that moved.  Her antics kept us laughing for days.  So, she's down at the shed, bobbing and weaving, trying to catch something.  A few moments later, when I called, "Kiera, come...bring it"  I really didn't notice what was in her mouth until she got closer. 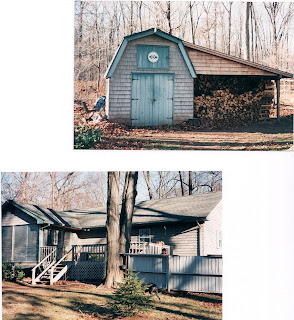 I just assumed that she had caught another mouse, or chipmunk, or possibly a mole and was "bringing it" in that ever so delicate, soft mouth that Pointers have.

To my surprise, as she got close to me and I saw something sticking out of her mouth.  "What the heck?" I thought.

It was then that I laughed so hard, I thought I would split my gut!!!
Oh, she had something in her mouth alright!

The mouse's tail was stuck between her lower teeth just like dental floss!

P.S.  Today is Tuesday and don't forget that Angela hosts her Show & Tail @ WVTreasures.  I'm linking up and you should to.  It's great fun...especially to read all the "tails"!!...:)

We have a boxer pup that is 6 months old. I shudder to think what he is going to bring into the house this spring and summer.

Just stopped by Show & Tail to say Hi. Your pooch sounds like a keeper. Loved your thoughts for the day on the sidebar. Visit me sometime at Nanniepannie's

Ben's a "senior citizen" now and he's never been prone to bring home "prizes" from the woods, but the other day he comes in with what I thought was a bone. On closer examination, I was horrified to see it was a dead possum's jaw bone complete with teeth! I had to take it away from him and he was mad at me the rest of the day!

With our dog, it might be a chicken leg sticking out!

You should see what he drags in from the fields. Right now we have a flattened box turtle shell from somewhere.

The cats sometimes leave us little "treats" by the porch door....last time it was a tiny vole.

My old lab, Jake used to insist on catching toads that would make his mouth foam and send him retching all over the backyard. I'm glad one of those didn't get stuck in his teeth! Great story. Ann

That's hilarious JP! lol You should keep a camera in your pocket just for such occasions as that! At first I thought you were going to say that she was carrying a big chunk of wood!

Oh, noooo...poor mousie! That must've looked funny - that would have made a great photo of the week!

Thanks for that story! I enjoyed it!

to funny, Jake walks funny and looks guilty when he catches a lizard, he knows we stop him if we see him, we laugh hystericaly when we see him sneaking by with a tail of the lizard sticking out of his mouth, he thinks we don't know.

My Disco is a baby - he won't catch a thing. sandie

ha! i can just picture that!!

it's funny the things they get their teeth around!

our Milo has dragged home lizards, mice, birds and even squirrels that were bigger than her!!