In Search of Ella

The last time we saw her, she was in her small sailboat heading towards the islands off  Southeast Asia.   What we didn't know was that she had encountered a horrific storm while at sea, had capsized and had to swim to shore.  It was there that she grasped the sand, soft as sugar, in her battered, weak hands as she tried to crawl just one more step.  She was exhausted.

She had taken cover among the palm trees realizing that her pale skin had already blistered from the hot sun.  She wished she had some oil to protect her virgin white skin.  Her eyes were weak from the sun too, and she anxiously awaited dusk which would enable her to skim  the horizon in search of vessels.  She was hungry and needed nourishment.

There, on the ground, lay some coconuts.  'Heaven only knows how long they've been there," she thought.  But she didn't care.  She would be able to extract the milk from them using the sharp object she had found on the beach.  And, although the consistency seemed a lot like whey, she drank it greedily.  After drinking the coconut milk, the taste it left brought thoughts of almonds, hazelnuts and walnuts to the forefront of her mind, all before finally drifting off to sleep.

When she awoke early the next morning, butterflies were in abundance and they danced through the air.  She knew that they were most active first thing in the morning and she took the time to enjoy them.   Occasionally one would land on her arm or leg to extract the minerals from her body.  This was her daily entertainment.
She never felt alone when with the butterflies.  Somehow, they gave her comfort, made her feel free and almost rejuvenated her, filling her with the pleasures of home.

However, after five days, she was reduced to almost nothing.  She once again tipped her head back in the tropical breeze catching the waft of cocoa. "It's here somewhere.  I just have to find it," she thought.  As she made her way through the trees, she spotted the cocoa beans.  They were plentiful and would nourish her aching belly.  Perhaps she could let them soak in the coconut milk.  Perhaps they would serve as an emulsifier, giving her additional nutrition.

As she wandered further and further each day, she eyed a leguminous plant that she thought she recognized.  "Is that soy?" she muttered.  "It can't be."  But it was.  She wondered if consuming it raw would harm her.  She didn't care and ate it anyway. Having never been to this part of the world, her discoveries created an excitement in her making each breath she drew more and more precious and sustainable.

Then, passing by the vanilla, a tropical orchid, she could almost taste the flavor of it's bean.  She reminisced about baking in her kitchen and using vanillin rather than the real thing.  Now that she was feeling stronger after consuming the beans and more coconut milk, she spied some eggs in a nest tucked neatly under a fallen tree.  Being a recent college graduate and having a roommate that was vegan helped.  She knew the egg yolks were a good source of lecithin and they, too, would be good for her.  Gagging as she swallowed the slimy raw eggs, she once again tried to envision something tasty and pleasurable.

Now it was time.  It was time to make another attempt to climb the mountain.  As she climbed the rough terrain and neared the top, she saw a small weathered structure surrounded by beams and posts tied together with vines like those she had seen in the forest. "There was nothing artificial about this place.  This was real!" she thought.  She would be alright after all.  It was the mission she had heard about before embarking on her journey.  She would be home soon.  She no longer would have to dream with the butterflies.

What's in your pantry?

No. Really. What's in there?

For this week's prompt, grab something out of your pantry and write a short piece - using all the words in the ingredients. It can be fiction or non-fiction, poetry or prose. 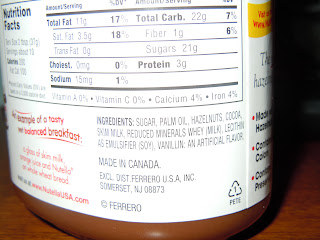 The product I selected from my pantry
was Nutella.  The ingredients are shown here consisting of nineteen words. 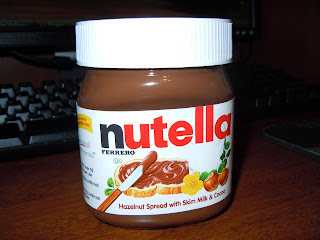 P.S.  Although this adventure was all "NU" "T" "ELLA", she would not want to go back to the island again! I just couldn't pass that up!!
Posted by Unknown at 3:31 AM