The Softer Side of Copper 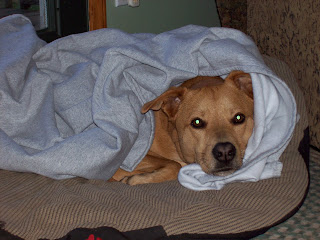 Look at that face!  I mean...how could anyone in their right mind think that this handsome man could be...well...a bonehead?

Once a week, I clean the "dogs room."  Yes, yes...they have their own room!!  Let's just move on, shall we?  Thanks to my husband's carpentry talents and some double hung tilt out thermal windows on sale at Lowe's a while back, a small screen porch became an all-season room.  Moon and Copper moved right in, along with a few of my houseplants! 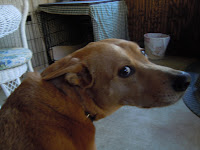 But, as I was attempting to take a few pictures (which now I'll have to show you another time!), my handsome man decided that he needed some "lovin' rubbin'"so I had to sit down and let him sit on my lap as he did the first time I met him!!

Since I was holding the camera so closely to him I got the top half... 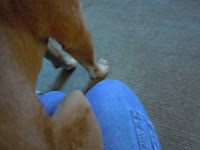 He's so sweet who cares what he does.

Awww he looks like my Levi just a differnt color and he looks like he is as spoiled as my big man.
They can be such big babies can't they?
Molly

Do I see a little German Shepherd in Copper? Or is it just my imagination. Our dogs do the exact same thing -- a paw or head on the lap signals it's time for some attention. He's such a cutie. :)

Lucky dog to have his own room! What a cute expression!

I love that he backed into your heart and your home. What a sweet, loving, love-worthy boy!

He looks like the blue bear on one of those softener commercials for your laundry. So cute.
Isn't it marvelous how a dog can fill your life with so much love? Copper knows he has it good in your house.
ta ta for now,,from Iowa

Laughing out loud over him sitting on your lap! Does he think he's a little dog or something!?! hehehe You gotta love a face like that!

What a great shot here! That sweetheart looks like such a great pet! Thank you for sharing today! Anne

I saw bone heads photo when i came to look at your header and had to read this older post. love it, made me laugh... he looks so innocent. great idea to turn the porch into a dog house