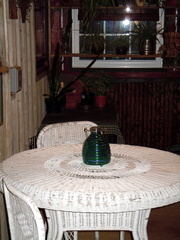 Well, let's get this over with because I can only imagine what will go through your minds when you read this!  The other day I mentioned that the "kids" had their own room.  I believe I also mentioned that thanks to my husband's talents, a screen porch became and all-season room.

I used to let Moon and Copper have the run of the house.  However, after I retired and realized that I was vacuuming everyday because of all the dog hair and also realized that there was more to life than cleaning the house, that changed.

So, I threw them out!  I have bad allergies to pet dander and I found that if I put a baby-gate across the doorway to the screen porch, they respected it as a boundary.  No jumping on it or over it...but then again, why would they?  Both of them were crate trained so they love their "beds".  The doors to their crates are never closed.  Joe also installed a doggie door so they can go in and out anytime they want.  There is a ceiling fan...yep..their own blooming ceiling fan...3 speeds and reverse too! 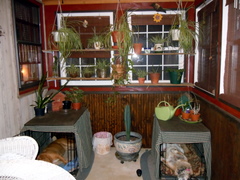 Do you see how much they are suffering? 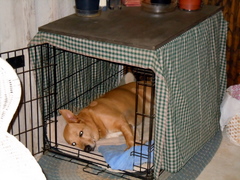 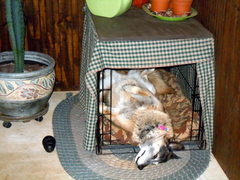 Wow - they have a nice little nest there. And they can come and go when they please - you can't beat that one. And I have terrible pet allergies to dander too - we have to clean and vacumn a lot - for one little dog. They look happy.

Lucky dogs -- they have a beautiful room. And at least you don't have a Samoyed!! No, I didn't get him, he just sort of arrived. I miss my Doberman pinscher's. No hair to speak of.--Inger

Oh how sweet. They have it tough there JP. I can tell that they are really mistreated and those crates--they obviously hate them. Poor, poor babies :) LOL
Amy

Laughing out loud! They are SO cute in their dens! I wish all pups were treated as well as ours...

It's a dogs life for sure! They look comfy cozy in their "living room!" I bought our cocker Ben a dog bed today out at Sam's Club. It's like 40x40 and takes up a big chunk of the living room. He is SPOILED ROTTEN!

Maybe you and your husband are the ones being kept out of the kids' clubhouse. "No mommys or daddys allowed." Haha!

If it weren't for Allegra-D twice a day, I don't know what I'd do. I'm super allergic to just about everything, so it's necessary with two dogs and two cats in the house.

What a comfty place Moon and Copper have, I'm with Carol, move over I'm in..:) They looked so relaxed...I am raising a new puppy and she is wearing me out.. LOL...

Yikes~! A personlized bedroom for the dogs.. I loved seeing them in their crates.. How cute is that~~! Baby gates are a wonderful thing to have and use.
You need to wash your dogs in LOC (Liquid Organic Cleaner),,, it's a Amway product.. It removes dogs dander and makes it so the owner won't be allergic being around them. This is what my son uses at his house in Illinois.. He is allergic to his dog and as long he he bathes his dog in LOC he has no problems with his allergy to dogs.. It's a great product that is very useful for lots of things...
ta ta for now...from Iowa where it's freezing cold ..

Well I think they sure look happy...contented and for sure "Love spoiled"..Lucky Dogs
Cheryl

Moon and Copper are a couple of lucky dogs! I wish my wife would let me snooze like those two lazy dogs :-)