I had told you previously that Super Heros were really in way back in the day.  Clearly, I really had no other option other than to turn myself and my husband (first) into two very popular Super Heros.  I was pretty handy with a sewing machine, so I made our costumes that we would be wearing to a Halloween party at a friend's house.

I sewed and sewed.  It almost seemed endless.  I'd measure and re-measure after he'd get home from work as I wanted our costumes to be a hit!  I really had to improvise for mine though, since I had only medium length hair.  Yep, I needed to get my hands on a wig.  As luck would have it, one of my best friends, at the time, cut and styled hair out of her home.  Off I went to Joanie's for a typical visit as our kids played together.

When I told her about my dilemma, she went into her bedroom and came out with the perfect wig.  We tried it on and we laughed...but it was "just what the doctor ordered" so to speak.  So here it was...the night of the party.  The babysitter was at the house and off we went.  But, before we got to Steve and Linda's, we needed to make a stop.  We needed to buy cigarettes.  I know...I know...but it's a thing of the past so don't worry.

My husband waited in the car and sent me into the convenience store.  I was wearing my long trench coat to hide my costume.  However, since I didn't have it buttoned, I had my hands in the side pockets and just sort of held it in place so as not to reveal my outfit...since it could have been a little awkward to say the least.

I waited in line, asked for the cigarettes and as I took my hands out of my pockets with the money in hand, the coat opened and revealed the entire front of my outfit.  Of course, I was uncomfortable enough wearing a wig let alone having to wear that gold headband thingy.  Suddenly, a man came through the door and saw my outfit.  He shouted, "Wonder Woman" melodically carrying the tune and in such a loud voice.  Rather than being totally humiliated, my reaction was quick.  I looked over at him, spun around dropping the coat to the floor!!  You know sometimes you just have to "role with it"!!! LOL!

Of course, when I got out to the car, I told my husband what had happened and he laughed just as much as I did.  We got to the party and I will tell you that there is an important lesson here:  NEVER EVER make a man with hairy legs wear tights!  You see, Michael was dressed as Batman sporting black tights, silk shorts that I'd made, a black silk cape, a black hood and black rubber boots!!!!  He HATED every long agonizing minute because he was hot and itchy and wiggled and scratched  all night long! 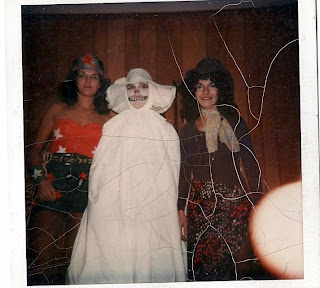 This photo should go down in the annals of history!! LOL...:)
It was taken with a Polaroid and as you can see it terribly cracked...I mean it was taken back in 1802!!  I laughed so hard when I spotted it that I just had to share it with you for a good chuckle!

Hope you & your family have a safe Halloween!

Don't forget to link up with Lisa for:   Memory Lane Fridays @ Two Bears Farm and Three Cubs
Posted by Unknown at 6:05 AM

You made a great Wonder Woman! Too funny. I used to smoke too back in the day. Good riddance to that habit, huh?

Haha! I love your reaction in the convenience store!

Thanks for sharing that great story!

What a great picture, and the crackling adds to the spooky theme! Have a great weekend...

What a fun story and a great outfit.

Great costume! It's fun to be able to dress up and reveal our "alter ego" at least once a year isn't it? I remember years ago when I went as a "biker chick" and went all out with my costume; head bandanna, ripped jeans, even got those temporary tattoes that I pasted all over both arms. A lady and her young daughter were walking toward me on the street on my way to the party and when she saw me she actually looked fearful and quickly walked across the street with the little girl. I laughed to myself but wanted to yell, "Wait! It's only a costume - I don't really look like this and these aren't even real tattoes!" Guess I was convincing though.

By the way, THANKS VERY MUCH for becoming my latest follower. I enjoy your blog immensely.

Which of the three of you in the photo is the real daughter of the monster that devoured Cleveland?